“Pride is the enemy of hope.” I read that quote this morning and wrote it in my journal. I’ve never heard it put quite like that before but it sums up so much of sin. One of the best definitions of Christian hope I’ve ever heard was that when we hope in Christ, we hope in something that we know will happen. We hope for Christ’s return; we know He will return. Pride places our hope in ourselves and so we are bound to fail. Hope dies when we are filled with pride. Pride is a difficult thing to kill but when I’m reminded that it can kill the hope I have, the hope I want, I’m more determined than ever to put my pride aside and focus on Jesus.

http://www.theglobeandmail.com/news/world/captains-error-blamed-for-cruise-disaster-fear-shifts-to-fuel-leak/article2303080/ This tragedy has been on the news a lot lately. Six deaths are confirmed and sixteen people are still missing after a cruise ship ran aground off Italy. The captain has been arrested and may face charges of manslaughter. I’ve read that, according to Italian law, he can face up to 12 years in prison for abandoning ship. He allegedly was one of the first ones off and left the rest of the crew to fend for themselves and help passengers. If true, it’s a cowardly action, for sure, but I was surprised that the whole “captain goes down with the ship” thing is still the law. I don’t know much about maritime law in general but that seems a little old-fashioned. The captain should have stayed and he should have helped as many people as he possibly could; I do believe that that was his duty and perhaps he should have been one of the last people off. But there must be some point where he is allowed to save himself. Does he really have to go down with the ship? Yes, I saw Titanic and we like to think of the captain as heroic, as tied forever to the sea, but is that necessary? If he can’t save anyone else, can’t he save himself? This captain has also been accused of willfully steering the cruise ship too close to land and thus causing it to hit a reef and for that there is no excuse. Allegedly, he was showing off. Another example of pride gone foul and a particularly sad one.

The sea is scary. Anyone who’s lived by it knows that, even in the comfort of a big city. 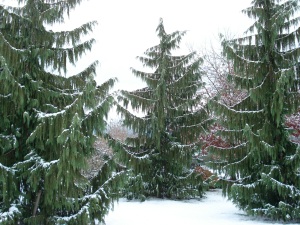 In local news, there’s still snow. It’s snowed the last two nights and it’s snowing heavily again today. I’m not used to snow that sticks around for more than a couple of days. It’s beautiful but not quite as fun on a Monday morning when I know my husband has to drive in it.