This summer Peter and I went on an adventure to Europe. With the help of a stellar memory and my obsessive journalling, I’m sharing those adventures with you.

After a long day of travel, we arrived in Cannes. This was a briefest stay of any location along our adventures – just one night. A layover, really, on our way to Paris. Our hotel was located directly across the street from the train station which turned out to be perfect for a single night stay.

It was late afternoon by the time we set out to explore the streets of Cannes. Our hotel neighbourhood was full of stores, a few restaurants, not far from the water where the beaches were crowded with bodies and the streets were lined with restaurants. We walked past the marina to look at the huge yachts parked there, young men and women in crisp polo shirts polishing their rails.

We avoided the beach – Peter and I are too Canadian to see a crowded beach as at all appealing – and instead looked for a place to eat. We dredged up our high school French to read menu boards and buy snacks in a corner store.

While wandering along the waterfront we noticed advertisements for a series of fireworks shows, one of which was occurring that night. Similar to the Symphony of Fire (an annual event in Vancouver), different countries performed on different nights and that night happened to be China. So after dinner, as it got dark, we headed back to the waterfront and watched the show.

It was wonderful – an event I love in Vancouver, here in this ritzy French city by another sea. The boardwalks were packed with people. Some who just showed up like us, others who’d spent the day at the beach staking out their spots. Young men break danced and passed the hat and vendors squeezed in wherever they could to sell glow sticks.

The next morning it poured rain. We had cappuccino and pastries at a cafe down the street and watched the rain come down as well-dressed French men and women darted through the downpour and men appeared as if out of nowhere to sell armfuls of umbrellas.

Our train was late in the day so we had time to walk around once the rain let up. Due to the weather, the beach was deserted and so we ventured on to the damp sand to take pictures.

Seeing our photo attempts, a Chinese tourist called out,

He came running over and took a number of photos of Peter and I while I used up my smattering of Mandarin. 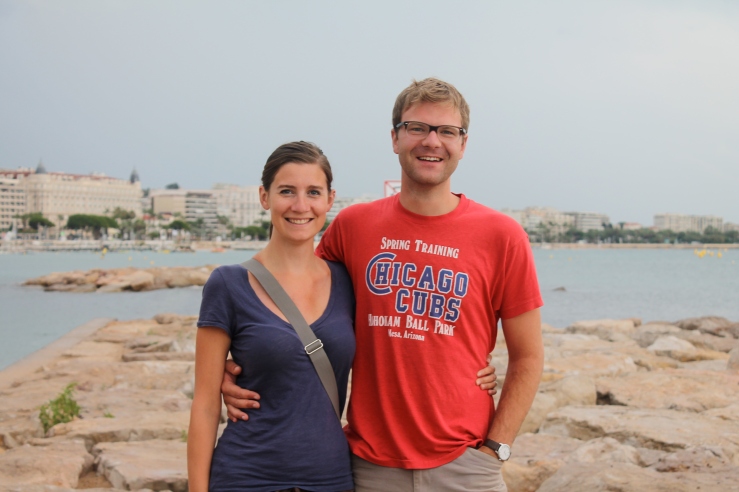 And, of course, Cannes is perhaps most famous for its annual film festival. Did we see any movie stars, you may wonder? Yes. Yes we certainly did.