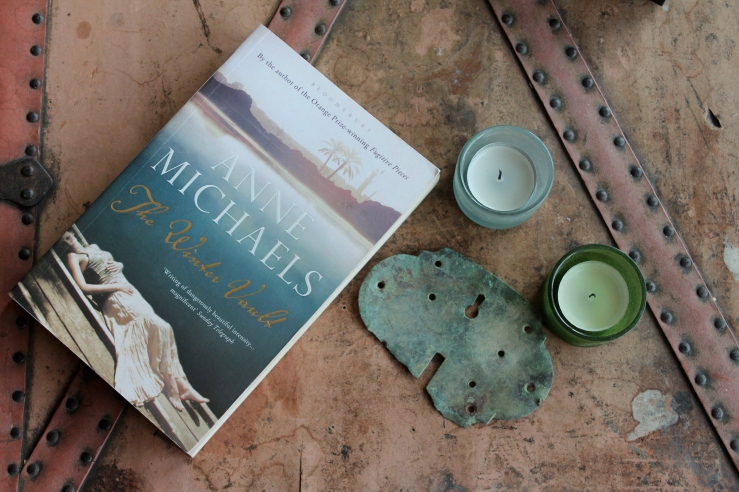 I had high hopes for The Winter Vault (McClelland & Stewart, 2009) after reading Fugitive Pieces and Michaels doesn’t disappoint. Her writing is poetic and descriptive. Her sentences feel good in your head as you read them. Her style often reminds me of Michael Ondaatje, who is one of my favourite authors. That said, if you don’t like that poetic style, I can see why you wouldn’t like this book. The Winter Vault largely consists of the characters telling each other stories, their personal histories. They tell them beautifully and richly and the scenes are luscious and romantic and I loved reading them but it certainly isn’t the way my husband and I talk to each other. There’s a definite surrealism here but I think Michaels makes it work.

Avery and Jean are newlyweds, freshly arrived in Egypt in the 1960s, where Avery is at work on the Aswan Dam. His specific job involves moving the Temple of Abu Simbel and a statue of Ramses. It is destruction and restoration in one blow. This is the biggest theme of the novel. We learn that Avery (a Brit) and Jean (a Canadian) met while he worked on the St. Lawrence Seaway, an area central to Jean’s childhood and her memories of her now deceased father. Later in the novel, we are introduced to Lucjan, who as a childhood survived in the rubble of the Warsaw ghetto and witnessed its slow rebuilding.

These stories are told through conversations. Back and forth on the banks of the Nile, or in Avery’s mother’s farmhouse, or in a Montreal apartment. Michaels takes us around the world, recreating a room or a city, or a desolate village. There are eerie scenes in empty communities in Egypt, after a population is forced into exodus. I was reminded of a trip down the Yangtze River, past abandoned towns, before the river was dammed. Michaels captures the disconcerting beauty, mixed with horror, of those places wonderfully.

Avery and Jean’s marriage is both developed and not. We see much of their early times together, in Canada, the moments in which they fall in love, the places they go together. There is a lot of texture to those moments – tastes and smells. Jean is a lover of plants and so every scene seems overgrown with a sort of springtime bloom.

Yet their present-day marriage – in Egypt and after – is harder to get a grip of. This may have been intentional, based on what happens between Jean and Avery in Egypt, but it makes it hard for the reader to understand where their relationship is currently and hard to know what should come of it. There are unexpected detours made that, initially, I was genuinely upset about. I wanted the novel to return to what it had started out as. But with wonderful description and that steady, truthful whisper of a story, Michaels and her characters drew me back in. I came to the end of the novel and felt like I was saying good-bye to old friends.

2 thoughts on “Book Review – The Winter Vault by Anne Michaels”