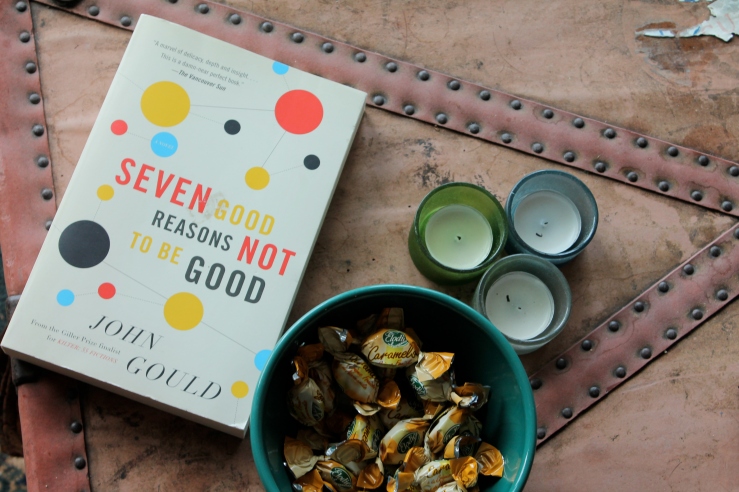 I liked this book more than I expected to. And while that may not sound like the highest praise, it’s meant to be a compliment. I knew almost nothing about the title when I picked up a copy at the thrift store, except that I had taken a single semester with John Gould as professor  in my first year at university, more than a decade ago. In fact, I thought it was a short story collection until I started reading it and realized I’d confused it with Gould’s first book, Kilter.

Seven Good Reasons Not to be Good (Harper Perennial, 2010) follows approximately a week in the life of Matt McKay’s life, beginning as he makes his way from Vancouver to Toronto. Matt is on a mission. He’s returning to the city where he grew up to visit his dad – who is slowly slipping away into dementia – and to save his best friend, Zane.

We quickly learn that Matt is escaping a few things too. His marriage is likely over and he’s just been fired from his job. Most of this is Matt’s fault.

Matt spends his first couple of days avoiding Zane and his father, paying too much for a hotel room, and engaging in an affair with a woman named Kate. We learn further details on the demise of his marriage, the nature of his job, and how he lost it. We dig deeper into Zane and Matt’s shared history and their friendship, spanning decades.

The novel is divided by days – Matt’s week in Toronto. Each chapter begins with a “postcard”, a message from Matt to Zane, designed to explain to Zane how virtue isn’t what he thinks it is. See, Zane has AIDS and he’s decided to reject treatment and let himself die. His work as a documentary filmmaker has taken him into the depths of this illness and shown him how access to medicine saves lives. Or destroys them. So now he’s making the ultimate statement with his own life. And Matt wants to stop him.

Here we hit on my major fault with the novel. Zane seems to be intended to exist as a sort of ultimate good guy, a Jesus figure even. Willing to sacrifice everything, even his own life. But for what? It’s never clear what result Zane hopes for. And, personally, I was never convinced of Zane’s ultimate goodness. Am I supposed to be? Or is that only how Matt sees him? Matt definitely has an idealized idea of his best friend but it’s never entirely shared with the reader. In fact, all the characters around Matt feel fairly flat. His wife, Mariko, particularly feels like a stereotype of the hippy, peace-spouting, free-loving, unfaithful wife. This isn’t helped by the fact we never get to see her “on-screen” (so to speak) but only hear her voice through e-mails and Matt’s memories.

Matt’s dad seems to be such a side character he might as well not be in the novel. Matt’s memories of his sister, Erin, loom much larger than the still-living figure of his father and “the dadinator” could have been easily cut.

Kate, Matt’s one-night stand that might turn into something more, fares a little better. She’s an interesting and multi-faceted character who I believed had a life outside of the hotel where she meets Matt. My only gripe there was that it seemed obvious from the beginning that she wasn’t telling the truth about herself and the fact that Matt didn’t pick up on this at all made me wonder how bright he was.

That said, I thought Gould did a great job with his setting. He recreates the Toronto of Matt and Zane’s childhood, melding it in with Matt’s return to Toronto for the first time in years. There’s an excellent blend of nostalgia and repulsion, familiar to anyone when confronted with childhood memories. At the same time, Gould sets his story in a very particular week. A late summer week in August 2003. There were a few times when the 2003 setting felt positively retro. I’m not convinced that the story needed to be set when it was but it made for a nice, “Oh yeah, I remember that,” moment when I recalled where I was during that August week.