It was about half past nine on Monday night when Peter and I got to the hospital. We were sent to an assessment room (a curtained-off corner) where I was hooked up to a fetal monitoring system while I waited for a doctor to see me. The curtains weren’t soundproof and so we couldn’t help eavesdrop on the woman next to us. Her water had also broken before labour started and her doctor was sending her home to await labour naturally. If it didn’t start, she would come back in the morning and they would induce her. Thinking we would be given a similar option, Peter and I agreed that we would hold off on inducement as long as possible.

A resident determined that it was indeed my water that had broken. A nurse brought me lemon tea. We watched the paper measuring my heartbeat and baby’s grow long enough to reach the floor. Every hour, Peter dashed out to the lot to pay for our parking spot. Finally, at one in the morning, we decided to pay for twelve hours.

Just before 1:30am, the doctor I had spoken to earlier on the phone came in to examine me. She had a portable ultrasound machine with her and she confirmed what the resident already suspected. The baby had moved.

For weeks, I had been told by multiple doctors and ultrasounds that our baby was head down. More than one doctor commented how low the baby was, how much pressure I must be feeling. And I was. It made perfect sense that baby’s head was crammed against my pelvis because that’s where my back ached and that’s why one leg seemed to swell more than the other. (In my last weeks of pregnancy, it became very obvious that baby was hanging out on my left side. I looked pretty lopsided, especially when I sat down.)

But at some point, possibly that day, possibly after my water broke, baby had moved. Our little one had pulled back up and now, instead of being head down, her shoulder wanted to come out first. Baby was breech and the doctor was telling us they would have to deliver by c-section.

All along I’d said that I wanted to birth my baby as naturally as possible but that, bottom line, I wanted what was best for the baby and for me. It was 1:30 in the morning and a doctor I had never met before was telling me I needed to have major surgery. Because my water had already broken, the clock was ticking on when this baby needed to be born. The immediate concern was that the umbilical cord could drop and baby’s life line might get cut off. There was no way I was leaving the hospital that night.

Peter and I had a few minutes to discuss but the decision was made. We had to do what was best for our baby.

From there, things moved quickly. The resident explained what would happen in the c-section, possible risks, and I signed the forms. The anesthesiologist came in to explain how the anesthetic worked and how it would feel. The nurse who’d brought me tea came in to insert my IV.  Another nurse brought me a biohazard bag to store my jewellery in and I took out my contact lenses. A pediatrician came in and explained the measures they were taking to be ready for our baby’s arrival. A team would be in the operating room with us, ready to deal with any immediate issues and she would be taken immediately to the NICU for monitoring. Peter went with him to see where she would stay.

By 2:30am I was in the OR, slumped forward “like a panda” (according to the anesthesiologist), getting a needle in my spine. Peter had been taken to changed into scrubs and seemed to have been gone a long time.

“Will my husband be here soon?” I asked plaintively, suddenly filled with fear that Peter was lost somewhere in the hospital and they would start without him. The nurses reassured me and reminded me that the doctors weren’t all there yet. I lay down on the table and felt my legs getting tingly and heavy until I couldn’t feel them anymore. The anesthesiologist did the ice cube test on me – I could feel a wet object on my skin but not the cold. I was numb up to my chest. I saw the doctors arrive, hands held up in front of them as the nurses helped them put on their gloves, and someone set up a curtain so I couldn’t see my lower half. In one corner, a team of pediatricians were prepping a newborn bed, complete with monitoring system. It wasn’t until later that I realized they were preparing for the possibility that our baby would be born without a beating heart.

My upper body seemed to shake uncontrollably but I squeezed Peter’s hand tightly and the anesthesiologist told me that this was normal. Apparently, it was much worse for women who had already been in labour and then had to have a c-section.

The operation started just after 3am and at 3:19, I heard a voice call out, “It’s a girl!” They took her straight to the pediatricians in the corner for her vitals to be checked. Peter went to see her and when he reached out to her, she grabbed his finger. The anesthesiologist held my hand and I listened to my baby’s cry.

And then they brought her to me and put her in my arms.

She was here. She was ours.

I got to hold her for about ten minutes before the pediatrician gently reminded me that he had to be the bad guy and take her to the NICU. Peter went with her and, again, the anesthesiologist held my hand. Honestly, she was amazing and made my experience so much easier. She alternated between asking me questions and telling me stories about her sons and grandchildren and it was exactly what I needed to keep my mind from wandering into worry. All together, the surgery took about an hour, most of that time spent stitching me back together. Peter came back before the end and then I was taking to a recovery area to wait for the anesthetic to wear off. Before I was wheeled up to my room – still in bed – I got to make a stop in the NICU and hold Pearl skin-to-skin for the first time.

That first day was hard. Pearl stayed in the NICU and I went up to our room. My first attempt to visit her was nixed by the nurse due to my dizziness and nausea so Peter went down to visit her alone. When I felt better, we were able to go down every couple of hours – Peter pushing me in a wheelchair while I pushed my IV pole in front of me. It was wonderful to hold her and terrible to leave her. But by that evening, the doctors told us she was well enough to be in our room with us. 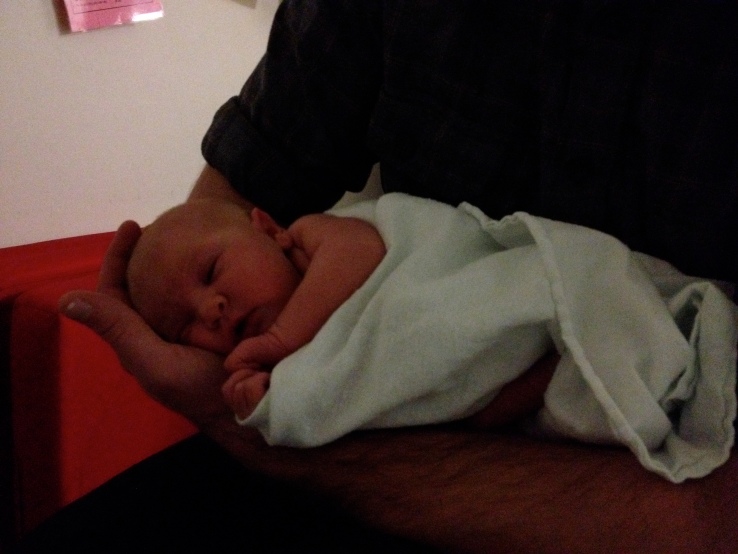 The next morning (Wednesday) Pearl had her appointment with the cardiologist. Since I still wasn’t very mobile, Peter took her while I waited anxiously and tried to nap.

“The cardiologist says her heart is 100% healthy,” Peter told me as he came into the room. He placed Pearl into my arms and I cried. I don’t think I could ever describe that moment – the intense happiness of it combined with the release of more pressure than I ever realized I was carrying.

We stayed in hospital until Friday. The doctors wanted to wait until Pearl was three days old to do an ultrasound of her kidneys, plus I was still recovering from surgery. I slowly graduated to walking around the room to walking down the hall. By Friday we were ready to go home but for those first couple of days it was great to have the support of the nurses as the three of us got used to each other. Being there for a few days meant we were able to take advantage of the hospital resources and got to visit a lactation expert and a physiotherapist.

Being in Vancouver also meant that we got lots of family visits. Pearl got to meet her grandparents, her cousins, all her aunts and uncles, as well as her great-grandmother and one of her great aunts. She is a well-loved little girl!

Friday morning, Pearl had an ultrasound of her kidneys. While they weren’t able to tell us anything definitive yet, they also found nothing to concern them now. She’ll have a follow-up ultrasound in about 6 months and we have a few warning signs to keep an eye out for but over and over again we were given good news and told that she was healthy.

God is good. He has held us in the palm of His hand through these days and He continues to do so. 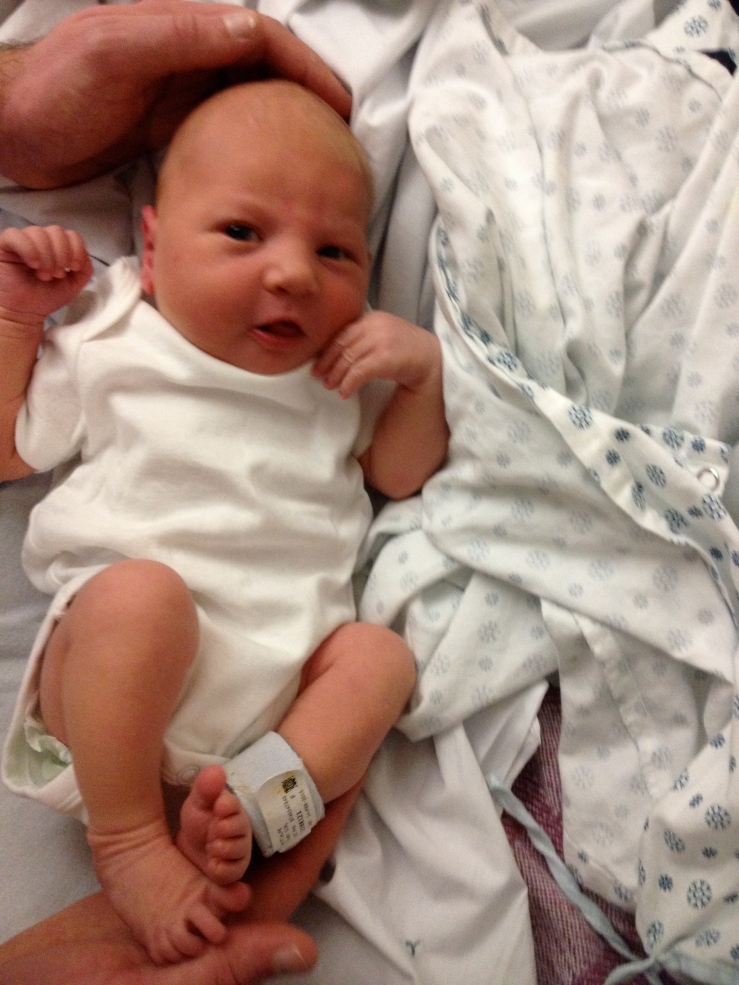 Friday afternoon we got Pearl dressed for the first time (and realized even the newborn stuff I’d packed was too big for her!) and headed out into the sunshine for the first time in days. We missed the ferry but Pearl didn’t mind. It was dark by the time we were back on the Coast but we drove along the highway, describing the sights to Pearl, telling her our stories, driving along the main street to show her where she lives, until we reached out little house on the water. We were all home.