Every stage with this girl so far has been my favourite. But we’re getting into such a good one. I was never crazy about newborns before I gave birth to one – I always said I liked them better around six months (when their heads are not so wobbly). Well, Pearl can hold up her own head and she’s fun enough to satisfy my pre-baby opinions!

She is full of smiles and gurgly laughs. She can play peek-a-boo and she loves her pink bunny with a bell inside. She rolls over like a pro and is so close to being able to sit up by herself. She drools like crazy and will put anything she can in her mouth. Recently, she’s become very fascinated by what we put in our mouths and reaches for any cup or bowl or utensil I might have. However, when I tried letting her drink from a cup she got confused and just let her milk dribble out. And while she was great at drinking from a bottle as a newborn, we didn’t keep it up and she won’t take one anymore.

We’ve come to realize Pearl is a bit of an introvert. She needs time to adjust when going to a new place and she doesn’t like being passed around to be held. Her smiles are a little rarer in those situations but she’s doing better and better. She always has a smile for her dad when he comes home though.

And she naps now! I’m proud of this because I’ve worked hard for it. We went from snatches of naps only while being held to 15-20 minute naps in her chair or bassinet to full hour naps alone in her bassinet. In fact, as I type, she’s been sleeping for an hour, in which time I took a shower. (Ah, the excitements of parenthood.) A nap or two or three a day has down wonders for eliminating fussy periods. 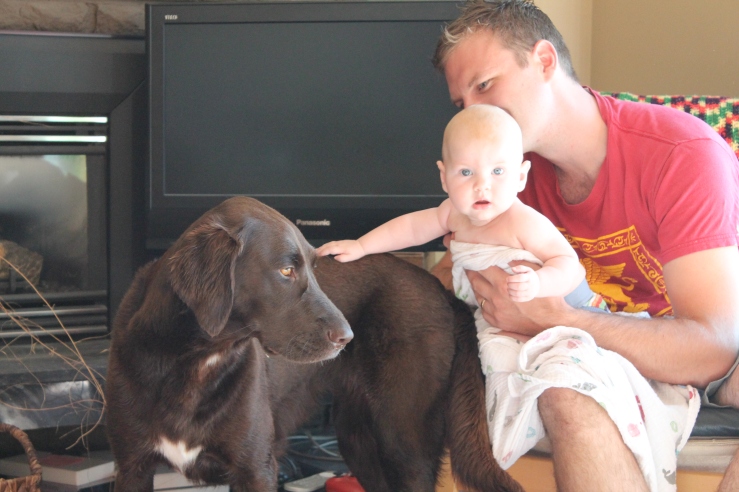 Recently, we dog-sat Bella the Dog. Pearl and Bella spent the first day completely ignoring each other. Then, suddenly, Pearl seemed to notice Bella and wanted to touch her all the time. She was fascinated by this moving creature who came to sniff her occasionally. Bella’s still not that interested in Pearl but we think she will be once Pearl starts eating solids (and dropping them on the floor).

We are currently waiting to hear the results of Pearl’s most recent ultrasound to check on the health of her kidneys. This is a check-up we’ve known would happen since we left the hospital in February. Her health has been so good though and we are so thankful for that. She makes us smile every day.