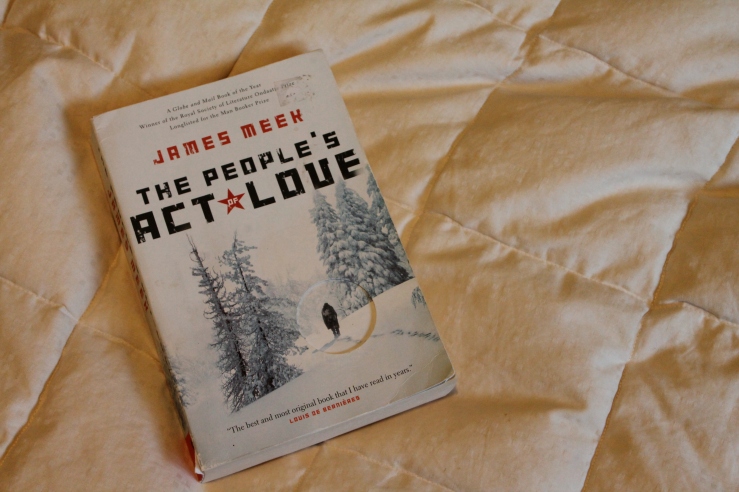 This book suffered from what I’ve come to think of as “my 2:30 am problem”. That’s where I start reading a new book in the middle of the night while up nursing. A good book is typically how I stay awake for these sessions (and if a book is really good I’ve been known to keep reading while holding a sleeping baby). It does not, however, work well when I start a book in the middle of the night. Half-asleep, I generally have a hard time getting a grasp on what’s happening and who the characters are. Throw in a bunch of Russian/Czech names and unfamiliar places and a requirement of dredging up my early 20th century historical knowledge and it took me far too long to get into this one.

All that to say, this was really a “it’s not you, it’s me” problem and the book is quite good. Dark, yes, but it’s Siberia in 1920. And while I find the first few chapters confusing, once the storyline settles in the town of Yazyk, it really finds its stride. We have the Czechoslovak Legion, a group of Czech soldiers who have yet to set foot in the newly-created Czechoslovakia. There are the villagers, a strange group who are clearly hiding something. And there’s the enigmatic character of Anna Petrovna, a widow who lives in the village but is not a part of it. Meeks does a great job here, having characters talk mysteriously about Anna, showing us a picture of her, so that by the time we meet her, we’re sitting up and paying attention. (Again, by this point in the novel it was daytime so I was a better reader.)

There’s also a mysterious man called the Mohican and an escaped convict named Samarin who has just arrived in Yazyk with a grizzly story to tell. The plot takes a dark and disturbing turn as Samarin details his escape from a Siberian prison and from there the action really gets moving.

Some knowledge of the Russian Revolution definitely helps with reading this novel but much of what’s interesting in it comes from the characters themselves. It’s about what motivates people, the places you call home and what that means, what love looks like, and how it can be perverted. Perhaps Meeks’ boldest choice is writing a novel that doesn’t truly have a hero. Filled with dynamic characters, each deeply flawed, sometimes in horrifying ways. Yet I wanted to root for almost all of them. In this vein, the conclusion of the novel is surprisingly satisfying. (Except for Anna Petrovna – I didn’t like her final choice but I won’t wreck the surprise for you!)

2 thoughts on “Book Review: The People’s Act of Love by James Meek”