Over the past six and a half years of marriage, Peter and I have tried to take advantage of Spring Break as much as we can. In 2012, we were young and broke but wanted to get out of town so we spent a few days in Washington, as cheaply as possible and had a blast.

In 2013, we went to Whistler and in 2014 we visited friends in Victoria. In 2015, Pearl was about two weeks old so we stayed home and slept very little and felt very thankful.

Last year, we fit a few things into our Spring Break.  A trip back to Whistler (that was cut down to one night because Pearl slept so terribly), a visit to some good friends in Kimberley (and Pearl’s first plane trip), and some general fun around our own town.

This year we decided to be slightly more ambitious. The baby we lost in the Fall was due right before Spring Break and so very early on I told Peter I didn’t care what we did, I just wanted to get out of town for Spring Break. We decided to take a road trip down to the Oregon Coast, as well as a couple of days in Portland. It was perfect and so great to have something to plan and look forward to as we came closer to that due date.

After our experience driving to and staying in Whistler last year, we weren’t entirely sure how Pearl would do on the road. But, figuring you don’t know until you try, we went ahead and took the plunge. (Spoiler alert: she did great!)

We left early Monday morning (on the first ferry off the Coast) and drove to Olympia, Washington. We basically bundled Pearl out of bed and into the car, feeding her breakfast on the ferry. She got a thrill out of being allowed to stay in her pyjamas all day. She fell asleep again once we were back on the road and basically slept until we arrived in Olympia around noon.

Neither Peter nor I had ever been to Olympia before so we had fun poking around downtown, popping into a few shops. It was pouring rain but it was nice to stretch our legs and see a new place. We stayed that night just outside of the city at a place we found on AirBnB. Our hosts were friendly, the room was a great size and Pearl slept decently well. Before her bedtime, we took a stroll along the boardwalk at the waterfront. 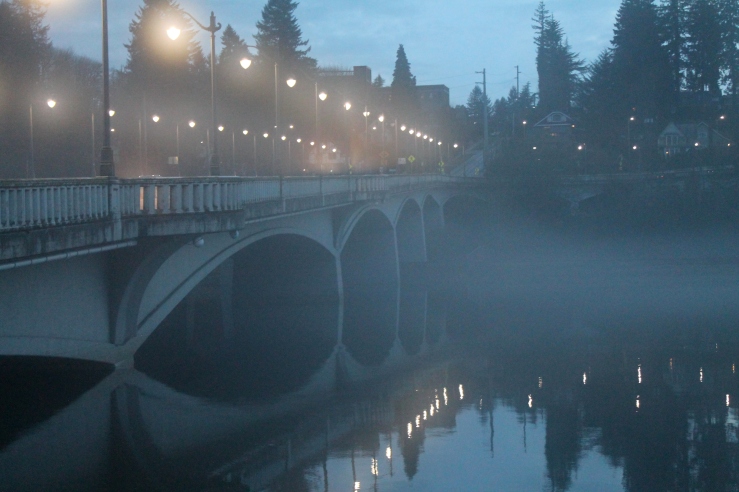 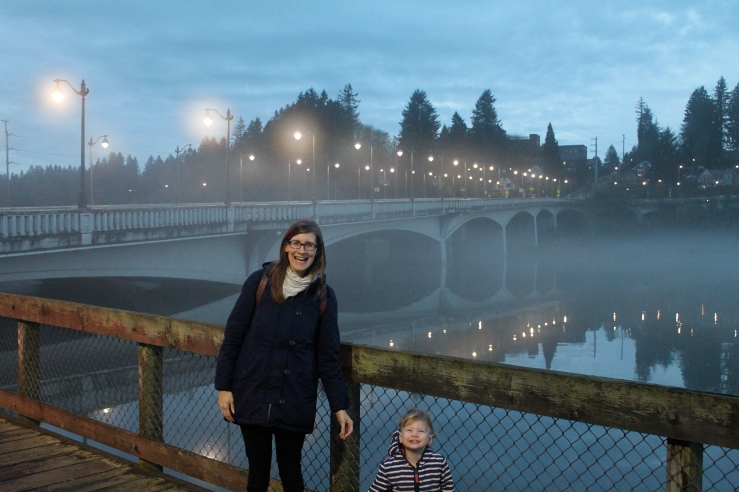 We left after breakfast the next morning and took our time driving down the coast. We opted to avoid the I-5 as much as we could and instead took some back highways where there weren’t many cars but lots of trees and we caught glimpses of small towns along the way. It rained heavily, which also made avoiding heavy traffic nice.

We stopped in Long Beach and got out to run around. It was pouring rain (sensing a pattern?) and windy and poor Pearl got covered in sand.

It was pretty cool to have this huge beach all to ourselves for a little while. We poked around the town a little, buying saltwater taffy and posing with the largest frying pan in the world.

We drove onwards (in the rain, always in the rain), crossing the Columbia River and entering Astoria.

We had lunch in Astoria and then, because the rain had let up, found a playground where Pearl could run around for a bit. She fell asleep in the car when we got back on the road and headed to our next destination: Manzanita.

When we first began planning our trip, we found a super deal for a hotel in the tiny coastal town of Manzanita and then planned the rest of our time around that. We stayed a total of four nights in Manzanita, renting a suite in a hotel across the road from the beach. There’s not a lot in Manzanita itself but we were able to do small trips each day to towns nearby like Cannon Beach, Seaside, and Tillamook. The suite was simple but perfect for our needs. Pearl had her own room (so we all slept very well), we had a small kitchen, a balcony, and a fireplace. It made for a great home base.

We spent a day in Seaside and took Pearl to the Aquarium there. While not a huge space, Pearl seemed to enjoy looking at the fish and she loved the touch tank. She did touch a starfish but mostly she liked splashing.

We spent time on the beach in Cannon Beach, where Pearl loved digging in the sand with sticks. She got a lot of use out of her rain pants on this trip. 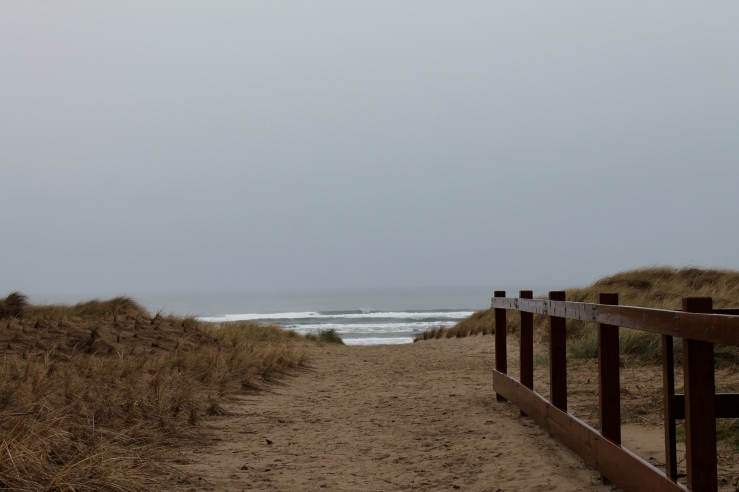 On Thursday, the sun came out and so we decided to hike a trail we’d heard about there. Oregon is full of state parks but, unfortunately, due to weather conditions, a lot of them seemed to be closed recently or have parts of their trails closed. We were able to see a little bit of Cape Meares Park that day, including a short walk to a lighthouse. Turns out, Pearl loves lighthouses and insisted that her stuffed cat, Gerald, is a lighthouse keeper. She also enjoyed this “funny tree”.

We had planned to visit the Tillamook Cheese Factory and had really been hyping it to Pearl, telling her she could eat as much cheese as she wanted (which is a lot of cheese), and I was excited to try their macaroni and cheese (my favourite food). Well, it turned out to be a good thing that she had fallen asleep when we pulled up because they were closed! Probably the biggest disappointment of the trip! Hey, we’re a dairy-loving family!

The next day we headed to Ecola State Park where we planned to hike the Indian Beach Head Trail. Unfortunately, due to weather and erosion, part of the trail was closed. The park was beautiful though and had amazing views and we got to enjoy it all the same. (Again, in the rain.) 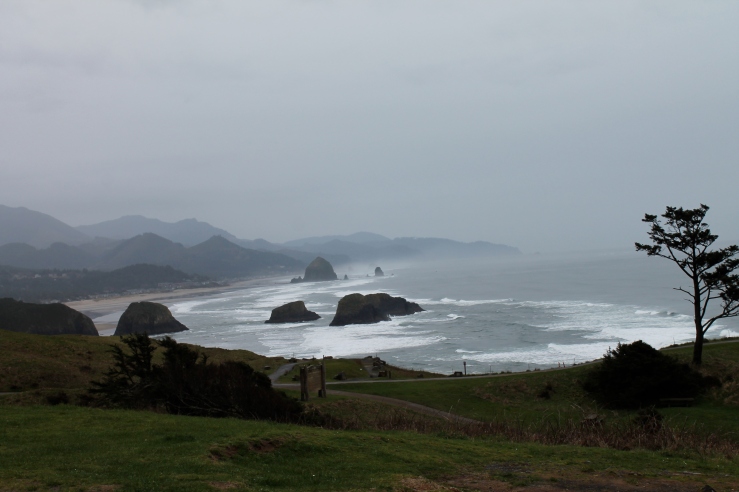 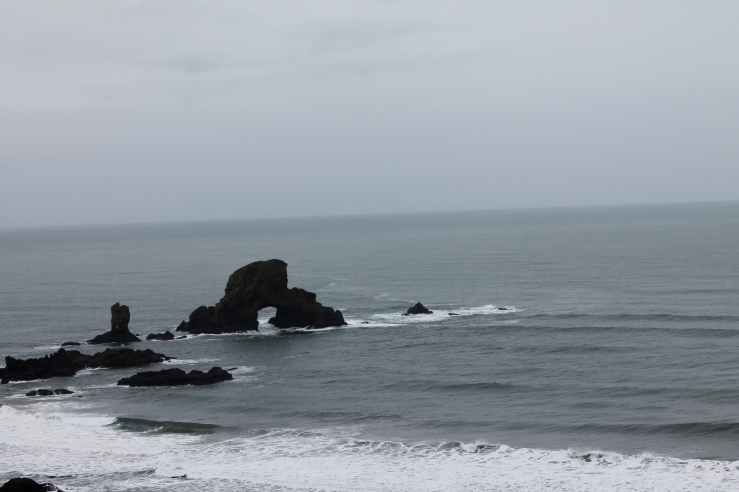 We ended our trip with two nights in Portland. Peter and I honeymooned there in 2010 but hadn’t been back since. While it was quite a different trip with a two-year-old in tow, we enjoyed seeing the city again.

We ate delicious food, taking full advantage of the food trucks, and I made two excellent visits to Powells Books.

We booked a private room in a hostel, something we’ve done a couple of times before. If you’re okay with sharing a bathroom, it’s a great way to get a cheaper place to stay. This hostel was a converted heritage house and our room ended up being quite large.

We knew from experience that downtown Portland was small enough to walk everywhere and it was nice to park the car for a couple of days and stroll through town (often at the pace of a two-year-old). We got lucky and didn’t have any rain while in Portland. And I finally got my mac and cheese, at Deschutes Brewery, and it was amazing.

All in all, probably our best Spring Break ever.